After a successful week of the 17th International Congress on Myriapodology in Krabi, our group headed on to Vietnam. Permits in hand, we landed in Hanoi around midnight and prepared for the next leg of our journey.

The next morning, we met our local contact, Dr. Anh Duc Nguyen, a scientist at the Institute of Ecology and Biological Resources and he brought us to his office. We were introduced to a few students and faculty, some of whom would be accompanying us on our collecting trips. Paul had prepared a short presentation about our lab’s work, which was well-received. Afterwards, we went on a tour of the National Museum of Natural History and then piled into a van for our journey north to Cúc Phương National Park, where our goal was: the millipede Parariukiaria. This xystodesmid millipede had been collected about a decade earlier, and we jumped at the chance to collect some new specimens for our research. 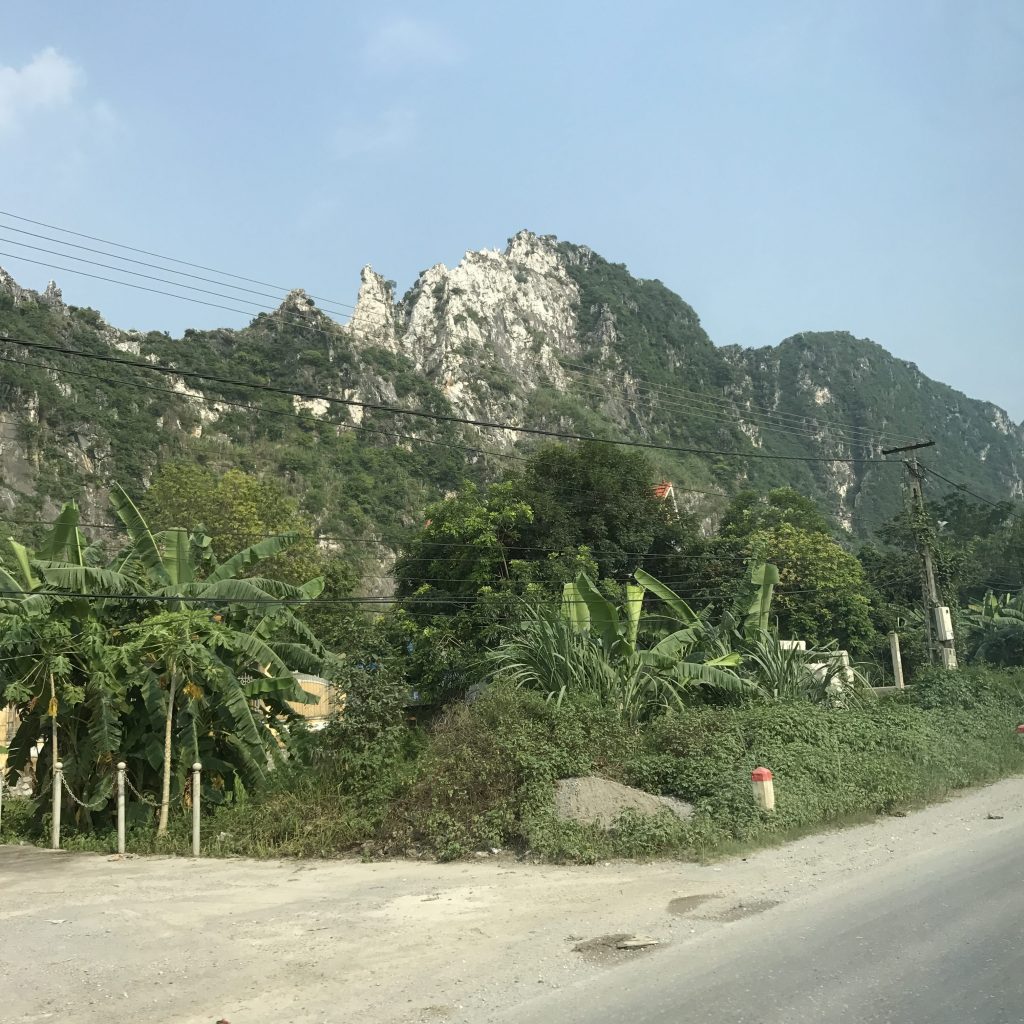 As we passed out of Hanoi and into the highlands, we became more excited. The flood plains gave way to beautiful limestone mountains jutting out of the landscape, and in a few hours we arrived at Cúc Phương. The entrance gate reminded us of the large gate of Jurassic Park, and we were itching to start collecting immediately—which we did. It was dark by the time we were all settled in our rooms, so we took our flashlights and ultraviolet lights with us and started down the road. It wasn’t long before we began finding millipedes, and we came across many millipedes in the family Paradoxosomatidae. At last, we were seeing this family in its native habitat, not just an introduced species like back in Virginia! We were surprised to find that the pill millipedes (Glomeridae) along the road fluoresced a blue-green color under UV light, reminiscent of various xystodesmid millipedes back home. If we didn’t realize we were in the jungle yet, our night collecting certainly solidified it. We came across massive insects on our walk, two particular stand outs were a stick insect that didn’t seem to mind us too much and a katydid which merely tolerated us. 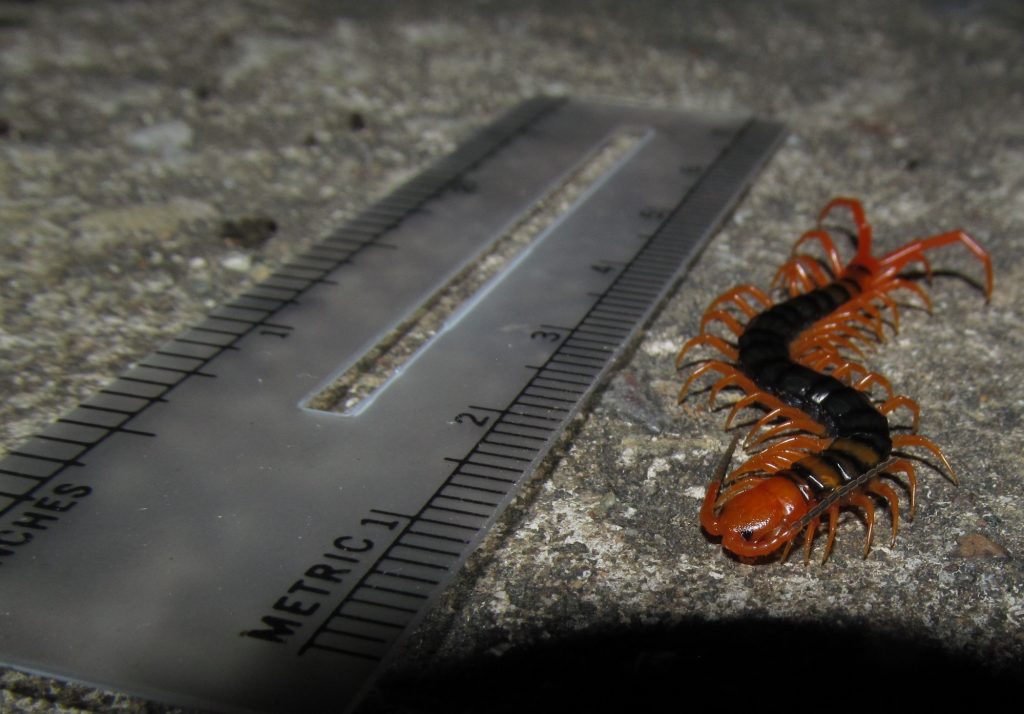 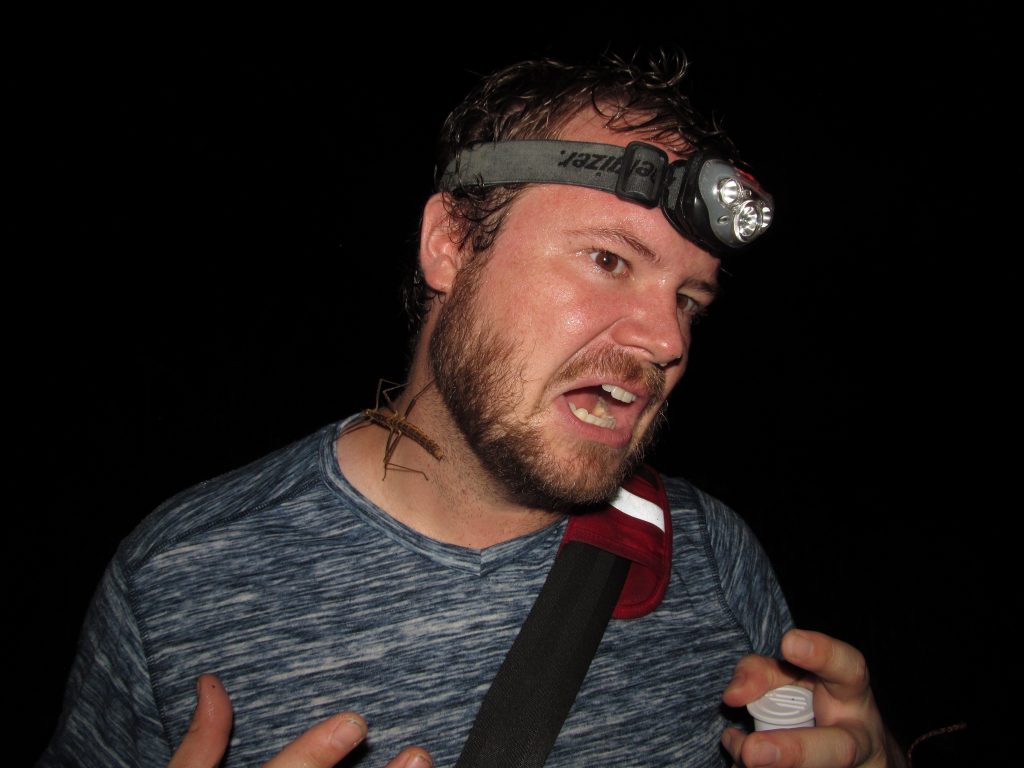 Jackson making friends with the wildlife

We spent the next few days exploring Cúc Phương and were joined by Luong Van Hien, a ranger who knew the park well and took us to great collecting spots. On our first full day in the park, we stopped at the Cave of Prehistoric Man, a large cave complex full of bats, and lucky for us, millipedes. Most of the millipedes we found there were small Polydesmida, with skeletal white Haplodesmidae in particular standing out. We were also lucky to come across a beautiful snake tucked in a corner of the cave, a Red-headed rat snake. It calmly kept an eye on us as we took photos, and wouldn’t be the last snake we saw on our trip. After our exploration of the cave, we broke for lunch and then continued our collecting. We didn’t have any luck with finding Parariukiaria, but we did come across many other millipedes. We were excited to see some giant pill millipedes in the order Sphaerotheriida, which can roll up into a tight ball about the size of a ping pong ball. While we didn’t find our target species, we couldn’t help but stop and appreciate the chorus of the rainforest while we were digging through the leaf litter. Unknown birdsong would echo through the forest, but what really impressed us were the cicadas that belted out songs that pierced through any other noise. Some sounded similar to our cicadas back home, but others sounded as though they were ripped out of a science fiction movie. 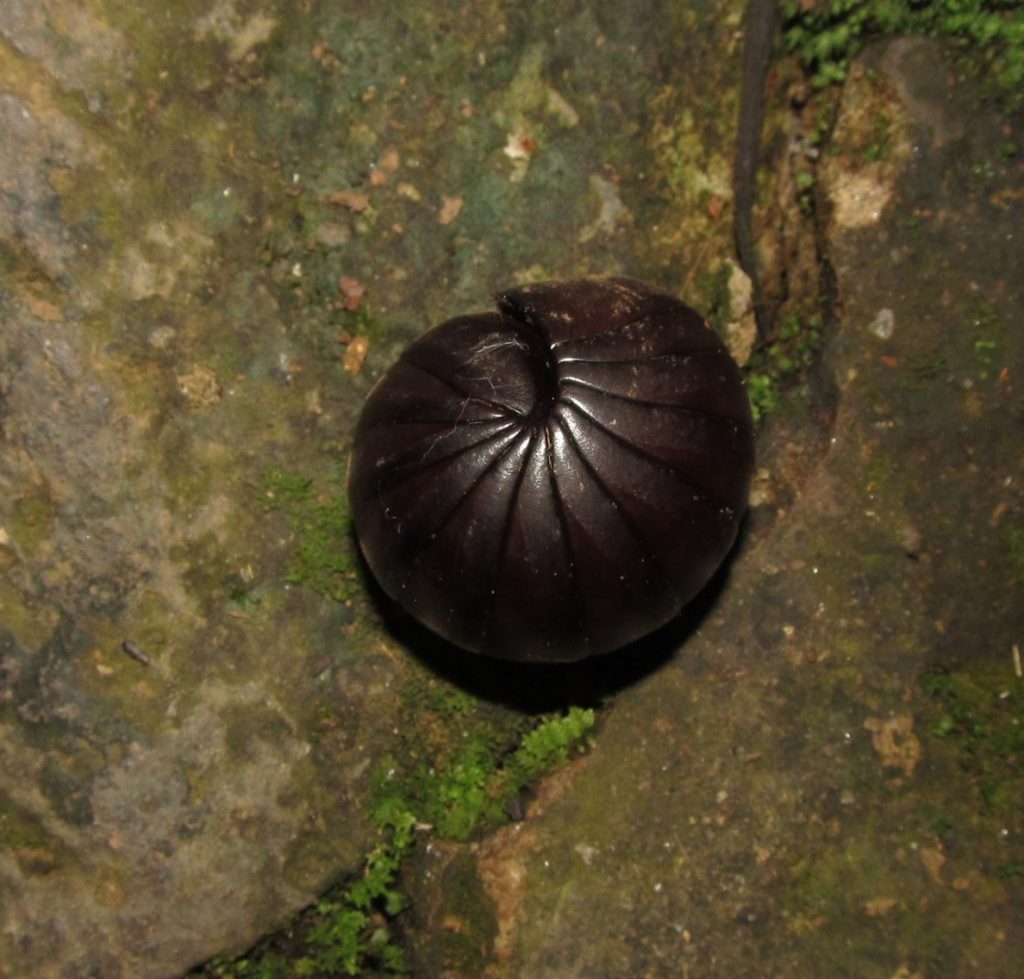 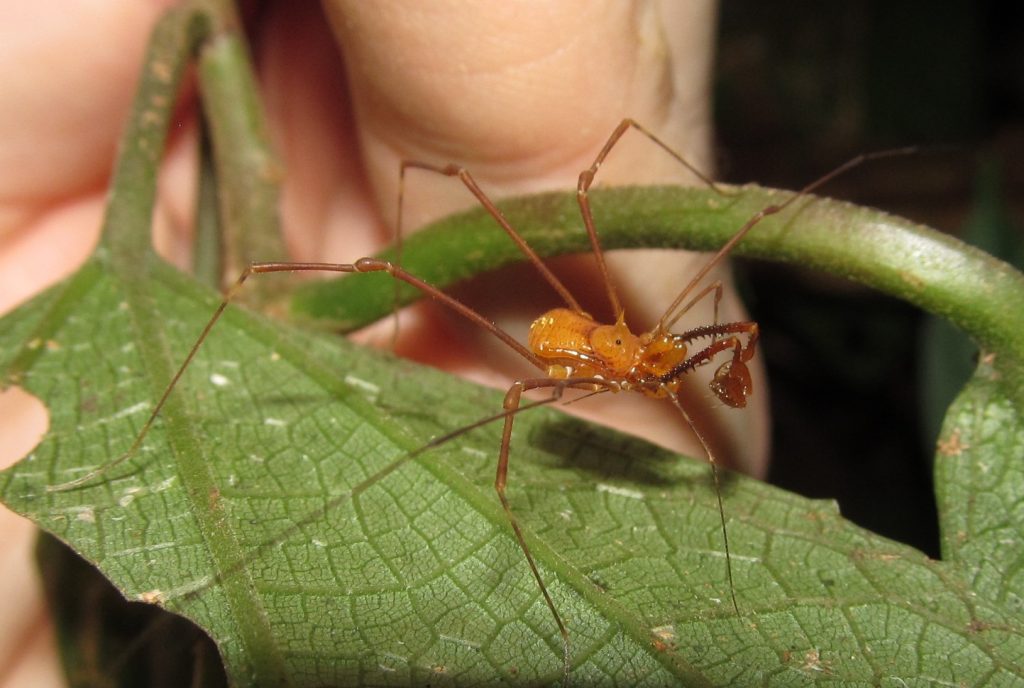 A rather pugilistic harvestman crawling along a leaf

Over the next few days, we spent many hours exploring the park and searching for Parariukiara, but to no avail. We were, however, lucky enough to find many other cool millipedes and insects. We found many millipedes in the family Platyrhacidae, typically covered in dirt and camouflaged quite well amongst the leaves. We were met with many more stick insects and leaf mimic mantids, and on more than one occasion we turned over a patch of leaves to find centipedes approaching a foot long. This gave us pause.

A female platyrhacid millipede poses on a leaf (Platyrhacus borealis) 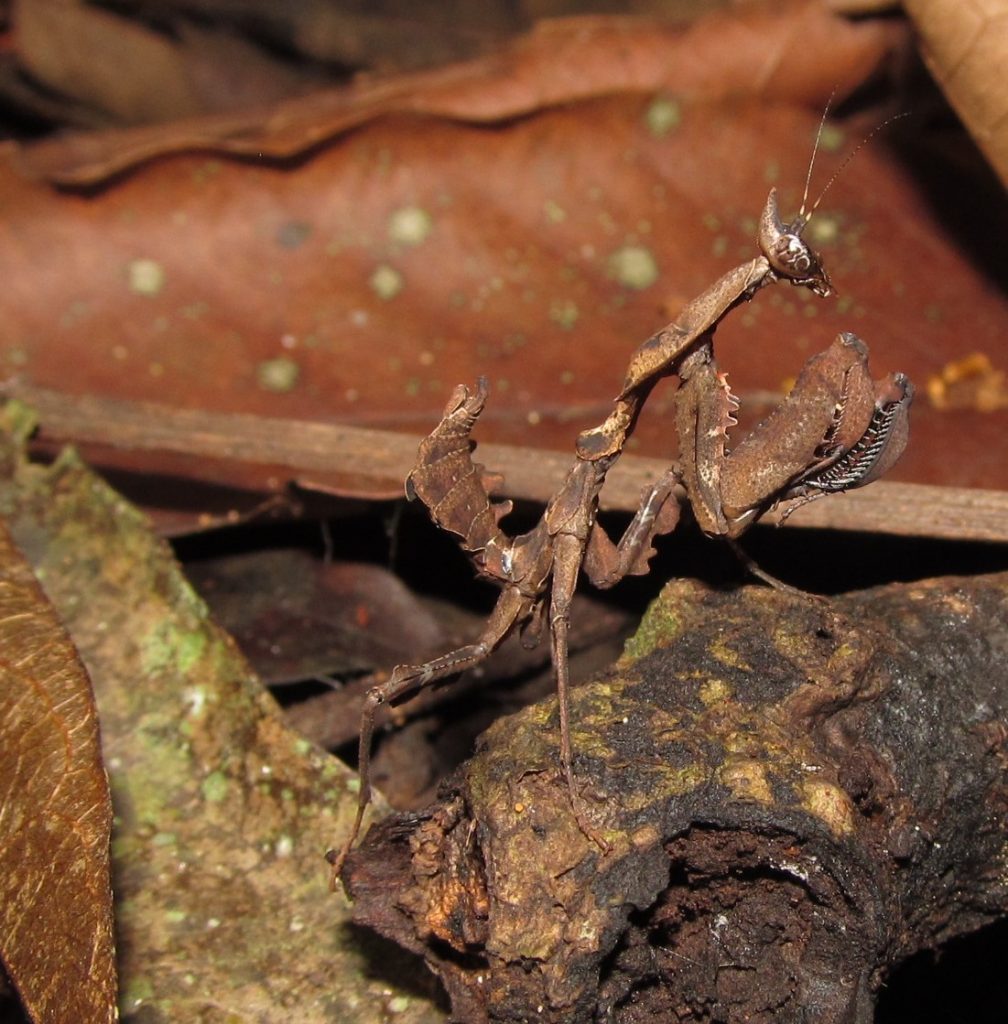 *This centipede, a member of the genus Scolopendra, was dead. We found it drowned, and then hilarity ensued; including wearing it like a brooch and like the ultimate pirate’s parrot. I do not recommend trying this at home with a live centipede.

4 Responses to Collecting millipedes in Vietnam