The new leggiest animal on Earth 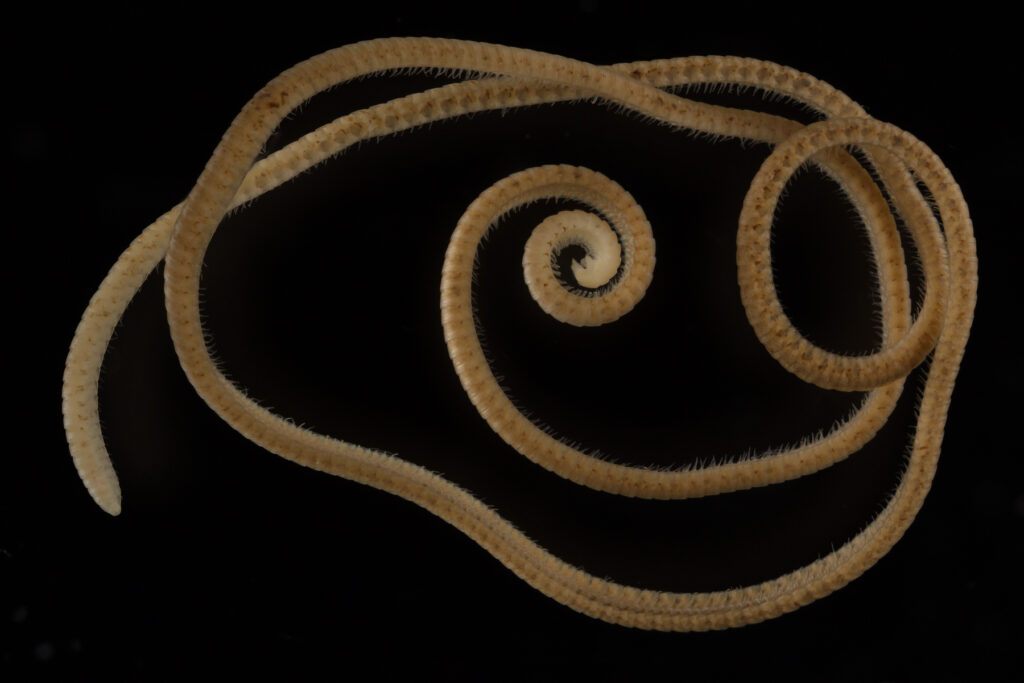 The leggiest animal on the planet, Eumillipes persephone Marek, 2021 with 1,306 legs.

In September 2020, I received an email from Bruno Buzatto in Perth, Australia, about a millipede that he and his colleagues found in Western Australia. He explained that it was thin and long and had close to 200 segments. He attached an image of the animal. Familiar with millipedes with many legs—like the previous record holder of leggiest animal Illacme plenipes Cook & Loomis, 1928—I was immediately interested and closely examined Bruno’s images. At first glance, the millipede appeared to be a relative of I. plenipes in the order Siphonophorida and family Siphonorhinidae. This quick image-based determination was based on the the millipede’s narrow thread-like body, lack of eyes and pigmentation, cone-shaped head, and enlarged antennae. I did a quick count of my own from Bruno’s image, and it appeared to have 204 segments and 806 legs, which is more than the 192 segments and 750 legs of the previous record holder, I. plenipes. Recognizing that it was something new and really exciting, I explained that I would be very interested in examining specimens in detail.

After depositing the specimens in the Western Australian Museum and introducing me to the museum’s arachnids and myriapods curator, Mark Harvey, the specimens were shipped to my laboratory at Virginia Tech. Mark, an arachnologist and expert in the subterranean invertebrate diversity of Western Australia, also shipped some extra specimens of Siphonophorida, including Australian siphonophorids and the South African siphonorhinid, Nematozonium filum Verhoeff, 1939—the supposed Old World relative of I. plenipes. 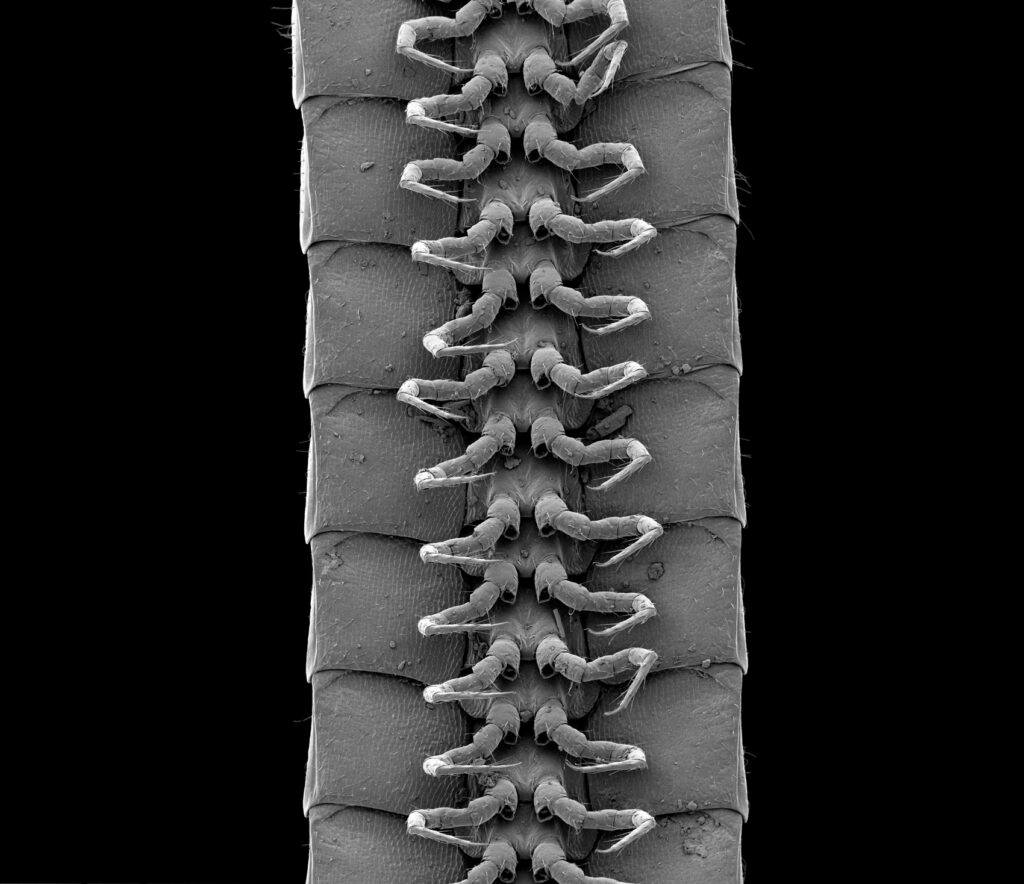 Waiting for the specimens to clear customs, U.S. Fish and Wildlife approval, and arrive in Blacksburg, I studied the diversity and distribution of the order Siphonophorida in Australia, and was reminded that although the family Siphonophoridae occurs in Australia, the Siphonorhinidae are not known to occur there. I knew that the country has many undescribed genera and species of the order Polyzoniida, but these known members of this family have eyes, dark pigmentation (many even with longitudinal or transverse yellow or white stripes), and are relatively flat and wide. They also occur on the surface, and no subterranean members of the order were known to occur in Australia. 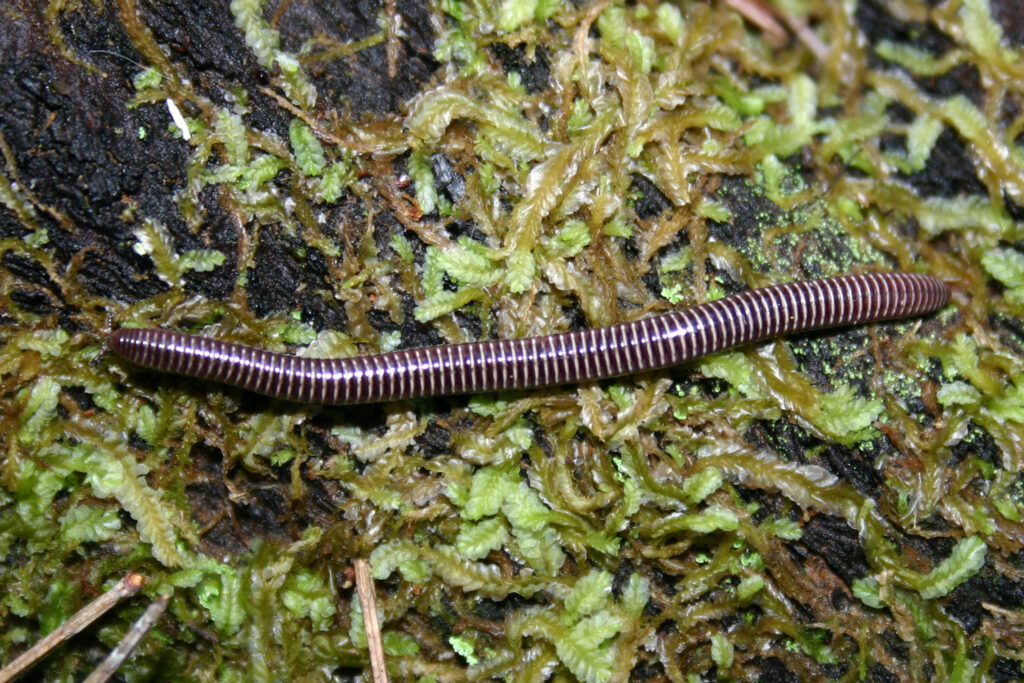 An undescribed genus and species of surface-dwelling polyzoniidan millipede from Walpole, Australia with 90 segments (family Siphonotidae)

Once the specimens arrived, and I looked at them with my stereomicroscope, they immediately looked like something that I have never seen before. Its small conical head, smooth dorsal surface of its segments, large antennae with equally sized antennomeres, and ozopores (chemical defense gland openings) set in far from the lateral edges, indicated that this was an extremely odd member of the order Polyzoniida. Previously, there had been no (known) members of the order without eyes, and there was no evidence of any ocular structures on the head of this millipede.

The specimens were long, thin, and coiled up like watch springs. I carefully uncoiled the specimens, photographed them, and counted segments. I selected the longest one to count first, and to my amazement, it possessed a phenomenal 330 segments and 1,306 legs. 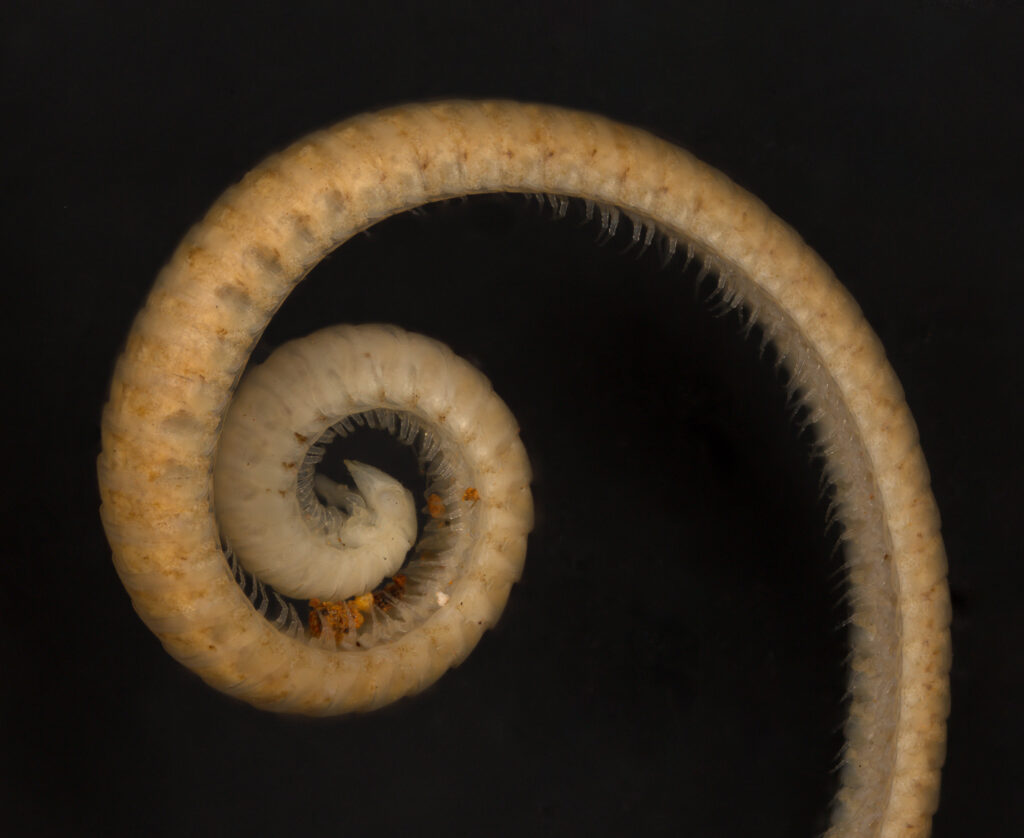 Anteriormost 66 segments of a female paratype of E. persephone with 330 rings and 1,306 legs.

Other analyses in the study included imaging specimens with a scanning electron microscope, and sequencing genomes of E. persephone and other millipedes in the group Colobognatha to show that super-elongation (having more than 180 body segments) evolved repeatedly in the millipede class Diplopoda. 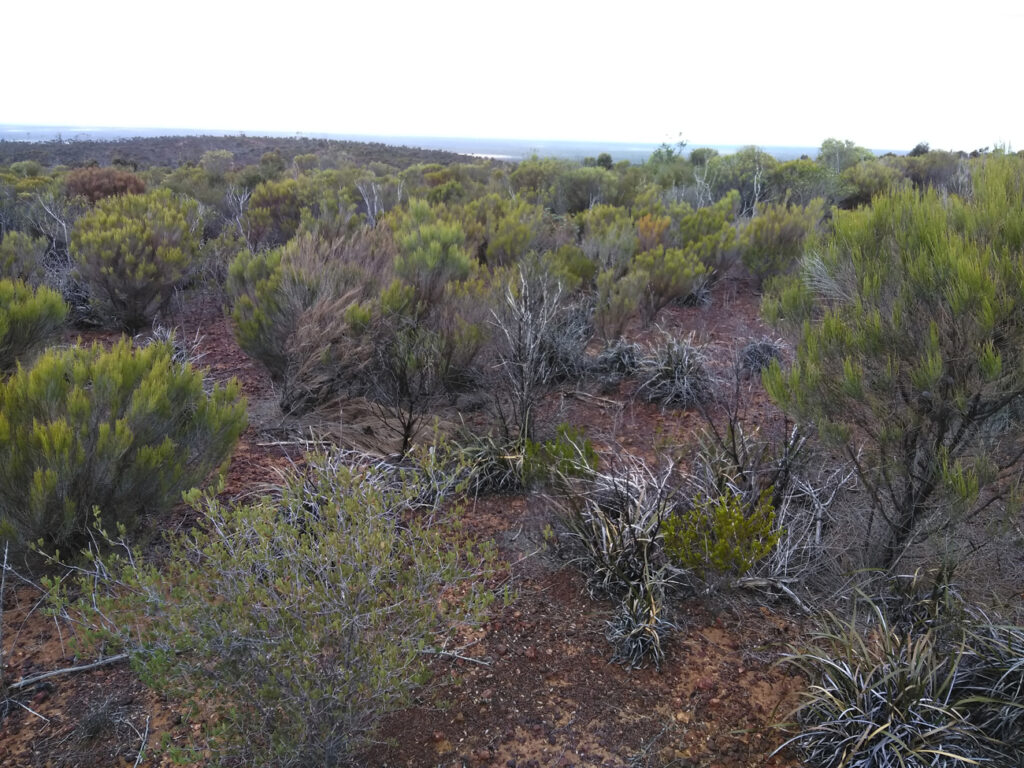 Sheoak shrubland on the surface of Eumillipes persephone habitat As detritivores, millipedes feed on decaying plant material, thereby fragmenting detritus into smaller pieces fostering later colonization by bacteria and fungi. This organic input aerates and conserves the soil, and the process releases nitrogen, carbon, simple sugars, and other nutrients back into the biosphere.

Despite their antiquity and important role as detritivores, known millipede species diversity tremendously lags behind estimated global diversity. For example, there are more than 50 undescribed species of Nannaria in the eastern United States alone, and globally an additional 3,000 – 80,000 species of Diplopoda when tropical locales and other poorly sampled regions are included.

This research was supported by a National Science Foundation Advancing Revisionary Taxonomy and Systematics grant to P. Marek (Division of Environmental Biology, Systematics and Biodiversity Sciences #1655635).

Earlier this month, I returned from two weeks of fieldwork in Japan where I collected millipedes and visited my colleague Dr. Tsutomu Tanabe of Kumamoto University. The trip was a wonderful combination of productive fieldwork, great discussions with Tsutomu and his students, and delicious ramen. The field trip was organized to collect millipedes of the family Xystodesmidae, which is the topic of my National Science Foundation grant (DEB #1655635). I started in Sapporo (Hokkaido Prefecture), then travelled to Tsukuba (Ibaraki Prefecture), Kumamoto (Kumamoto Prefecture), and finally Mount Unzen (Nagasaki Prefecture).

Millipedes of the family Xystodesmidae occur in the Holarctic realm (more specifically in North America, East Asia, the Russian Far East, China, Northern Vietnam, and the Mediterranean). My laboratory’s research at Virginia Tech focuses on this family. It’s always exciting to find xystodesmid millipedes because they’re brightly colored and smell like cherries. We continue to discover new species in Appalachia, and even found a new species on Virginia Tech’s campus. Notably, xystodesmids in California are nocturnal and some glow in the dark. In contrast, xystodesmids in Appalachia tend to be diurnal (day active). Because I am familiar with xystodesmids and have collected them from throughout the U.S., it’s been a goal of mine to collect them in Japan.

The first genus on the list was Levizonus, which has eight species. Five of them live in the Russian Far East, one in Korea, and two in Japan. The two Japanese species overlap in their distributions in Sapporo, and include Levizonus takakuwai (Verhoeff, 1941) and Levizonus montanus (Takakuwa, 1941). Levizonus takakuwai occurs in southwestern Hokkaido with a well-documented population at Maruyama Park in Sapporo. This is where we looked first. The previous week, I collected xystodesmids in Virginia, which are day active, so we started fieldwork for L. takakuwai at Maruyama Park in the early morning. 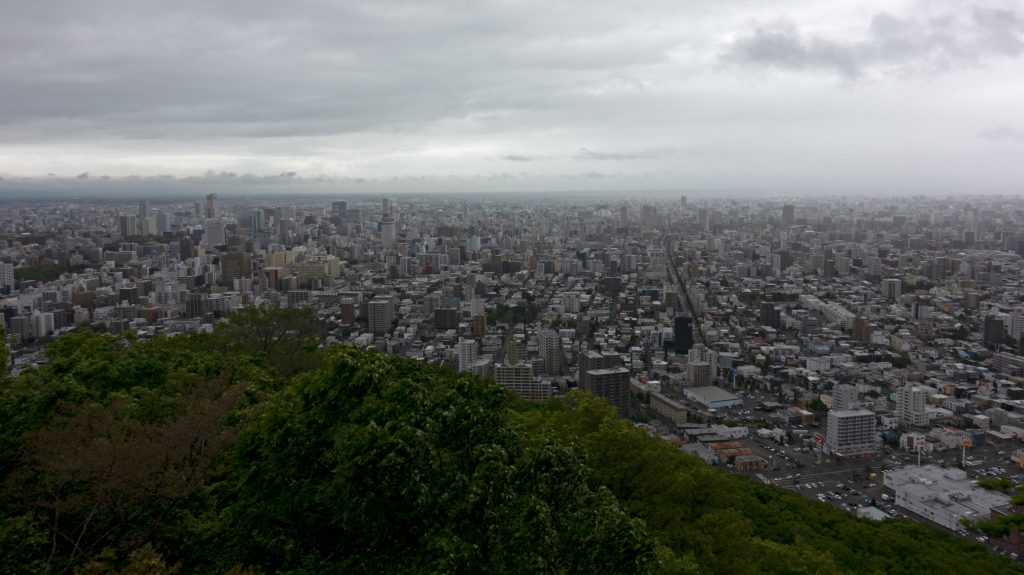 Maruyama Park is composed of deciduous forests with maples, magnolias, and even poison ivy, and stinging nettles, which reminded me of the flora of Appalachia. We spent the entire morning, took a break at noon for ramen, and continued in the early afternoon searching for L. takakuwai. Even with geographical coordinates from Tsutomu, we could not find it. After hiking up to near the peak of Mount Maruyama, I finally found a male L. takakuwai, followed by a female specimen that was collected by Charity. The site was a deciduous forest with lots of maple, and knee-high bamboo growing in large patches. During a hour-long search, two millipedes were found beneath decaying leaves and other moist detritus. Taking note of their scarcity and remembering Tsutomu’s observation that they’re burrowed underground during the day, we planned to return at night with an ultraviolet flashlight. Xystodesmid millipedes are fluorescent and glow green when illuminated with ultraviolet light. I’ve collected xystodesmids in California where they are nocturnal and practically unfindable during the day, but easily found during the night. 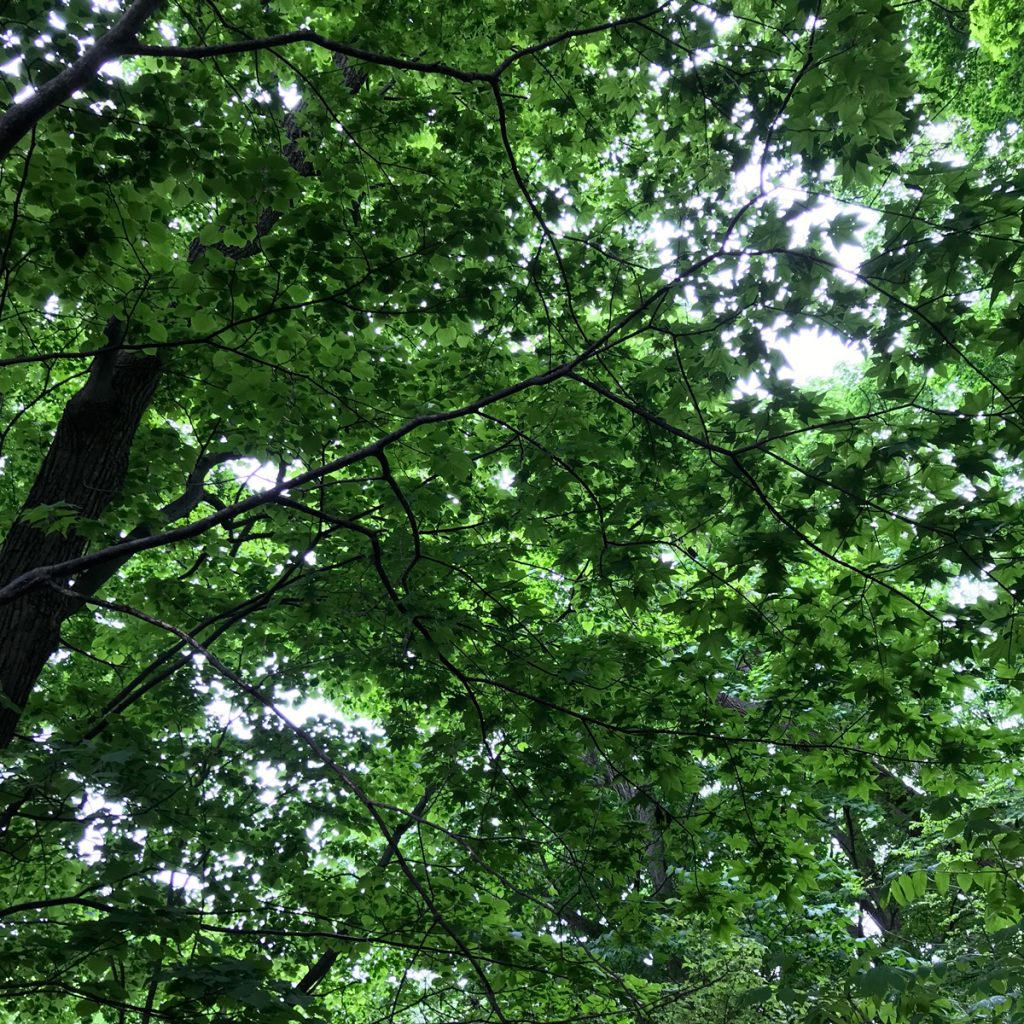 At night, we walked across the grassy field at the edge of Maruyama Park into the forest, turned on our UV flashlights, and immediately found a fluorescent green L. takakuwai emerging from the ground. Then, we found a second, a third, and eventually encountered about 50 millipedes. Levizonus takakuwai, like Californian xystodesmids, is nocturnal and fluorescent. The defense secretions of L. takakuwai are similar to Californian xystodesmids too, and they have less of a cherry odor and smell more like the burnt rubber aroma of Chonaphe, Harpaphe, Xystocheir, and other species from the U.S. West Coast. Having found two millipedes in six hours of collecting during the day and 50 millipedes in 15 minutes at night, we spent almost the entire trip collecting at night.