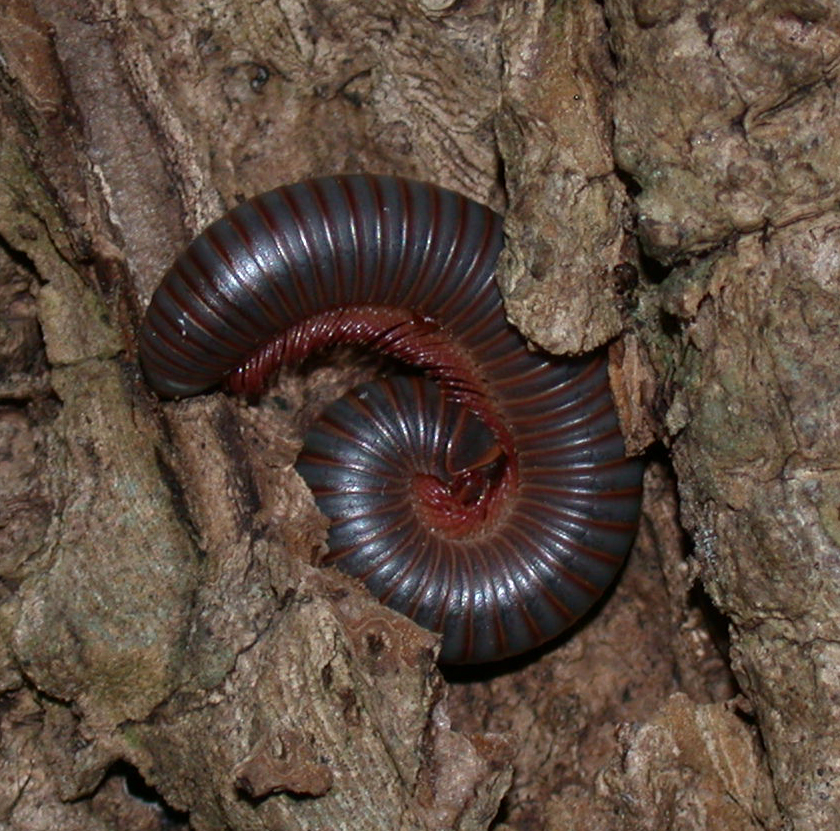 This millipede is Narceus americanus (Palisot de Beauvois, 1817) that I found curled up in the trunk of a live tree. At night, N. americanus is known to climb trees and graze on algae and fungus adhering to the surface of the bark. Their contribution to decomposition and nutrient cycling is quite spectacular.

Many millipedes, especially individuals of the species N. americanus, are voracious detritivores and feed on decaying leaves, wood, bark and other decomposing vegetation. Millipedes provide a really important ecosystem service by fragmenting decaying vegetation thus increasing surface area for colonization by microorganisms (e.g., bacteria and fungus). These microbes complete the process of decomposition and free up nutrients for future generations of life to use.

Based on careful natural history observations, Frederick Coville, former chief botanist of the USDA who studied a population of Narceus americanus from Plummers Island, described the astounding composting abilities of these diminutive animals. He and Herbert Barber, a beetle expert at the Smithsonian, discovered 1000 individual N. americanus while searching a 1000 sq-ft surface of the island at night. On another occasion, they found 320 individuals in a 80 sq-ft area by carefully sifting through the fallen leaves and detritus of the forest.

Coville found that each N. americanus produces about a half cubic centimeter of excrement a day. That’s about an M&M’s worth of feces, which equates to nutrient rich compost for the forest. By measuring the amount of excrement that N. americanus produced each day, easily counted because they’re excreted as firm oval pellets, Coville estimated that they contribute more than 2 tons of compost (about 2 small automobiles worth!) to an acre of the forest each year. Quite a spectacular contribution, considering it’s coming from just one species in the forest.

*In the article, Narceus americanus is referred to as Spirobolus marginatus, which is an old name for the same species. (Article contributed by MBLWHOI through Biodiversity Heritage Library.)

This entry was posted in Uncategorized and tagged Appalachia, decomposer, fieldwork, millipede, Narceus. Bookmark the permalink.